Too much television watchin’ got me chasin’ dreams

Too much television watchin’ got me chasin’ dreams

Too much television watchin’ got me chasin’ dreams, presented by Off Site Project, builds upon our growing obsession with luxury real-estate TV, an industry secretly rotting from the inside out. Stealing tropes from other hit shows, such as the Real Housewives of X, Y or Z and Flipping Out, this sub-bread relies heavily on backstabbing, overwrought emotions and dramatic deal making, to cover up its shabby construction and to pave over the grim reality that lurks beneath supposedly glamorous lives.

Vacating one screen for another, we can take to the skies to look up the featured Beverly Hills’ McMansions, observing them from Google Maps’ bird’s eye view, before dropping into Street View to spy their grandiose gates along an imagined drive. Away from the frenetic drama, reality gains another kind of energy, shifting gears to a tranquil utopian promise, where every scene is suspended in eternal sunshine.

Produced by the creative team Obso1337 and artist Ian Jacob Williamson, with curator Nicole Tatschl, Too much television watchin’ got me chasin’ dreams pokes behind the curtains and shatters the pristine presentations of TV and tech giants alike. Parodying the millennial’s navigation of choice, we are submerged in a fictional drive through the cul de sacs and gated communities of Hollywood’s elite, leaving our tour bus to make occasional detours into the lives of the rich and famous. Employing memes as a form of cultural critique, the exhibition collages our generation’s meta-commentary visual dialect onto downloaded 360 degree locations, exposing the darker side of neighbours featured within the shows. Speaking directly to a generation brought up amongst shifting knowledge landscapes and an onslaught of pulp TV, the exhibition asks ‘why are we still yet so obsessed with such blatant lies?” Is it because we wish we could live them?

obso1337 is a collaborative practice comprising by Tobias Seymour & Lachlan KosaniukInnes, formerly known as AVD. Beginning life as an online gallery, hosting digital exhibitions exclusively designed for smartphones, obso1337 has more recently branched out into the physical world, incorporating interactions between the smartphone and installation forms in real locations. Recent exhibitions include: Hypersurface, Austrian Cultural Forum London, London; Posthuman Island, Feltzine, online (2020); Not To My Taste, Harlesden High Street, London; and Villa Rosa, 20-21 Visual Arts Centre, Scunthorpe (2019). AVD became obso1337 at a moment of introspection, obso1337 aims to remove the self imposed limitations of the former platform to work within a broader scope.

Ian Jacob Williamson is an artist and curator based in London. His practice confronts the increasingly unstable device that is the image and explores its impact on delivering a coherent understanding of our global condition. Williamson’s work often takes the form of video installations in order to address the physical and virtual position that the image so ambiguously navigates. His most recent exhibitions include: Spout, Ghost Whale; Distant Peak, Peak, London (2020); Not My Taste, Harlesden High Street, London; Villa Rosa, 21-21 Visual Arts Centre, Scunthorpe (2019); and TURDUCKEN: Ready Steady Puke, Centrespace Gallery, Bristol (2018). Alongside his own practice, Williamson is part of DANK Collective, a collective exploring performance, video and online platforms.

Nicole Tatschl is an independent Austrian curator and publisher based in London. Her interest lies in the digital world and how we interact with the internet on a day to day basis by living hyperconnected lives. Her curatorial projects have appeared online and in galleries, with Hypersurface at the Austrian Cultural Forum being the most recent one. In 2018 she founded the independent publishing house Elam Publishing that specialises in artist and exhibition publications.

Off Site Project is an online curatorial practice founded by Pita Arreola-Burns and Elliott Burns, which runs a programme of homepage exhibitions; downloadable ZIP shows; and a residency based in Google Maps. Through its exhibition programme Off Site Project has explored issues pertaining to our increasingly networked, digitised world, from post-colonialism in Latin America to the increasingly monetised wellness industry, around societal effects of the internet to the prevalence of conspiratorial thinking, as well as the creative identity of AI minds and our ability to inhabit multiple realities through avatar creations. Off Site Project has been invited to speak at Central Saint Martins, Modern Art Oxford, Somerset House Studios, Tate Exchange and the UCL Multimedia Anthropology. 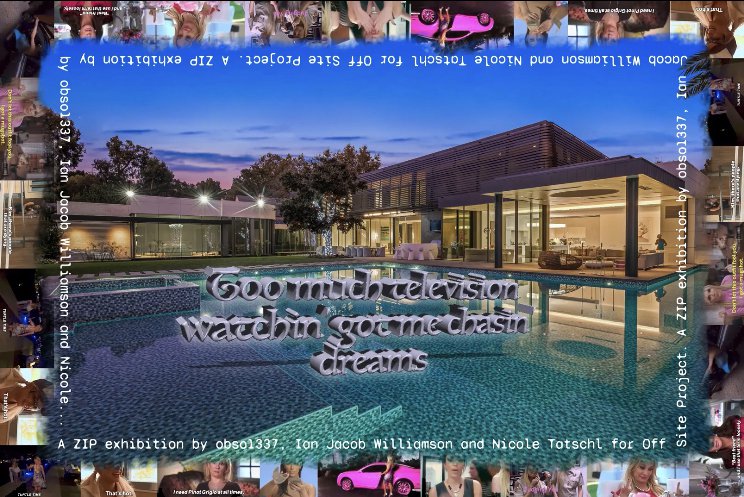