Translated by Penny Black with translation assistance by Karen Jürs-Munby

Following the critically acclaimed run of Sports Play by Nobel Prize winner Elfriede Jelinek, which coincided with the London 2012 Olympics, Just a Must is reviving the play for two nights only at the Camden People’s Theatre (13-14 July 2013) before embarking on an international tour.

Sports Play explores, with angry wit, the marketing and sale of human bodies and emotions in sport, questioning our obsession with fitness, body image and high performance at any cost. Blurring the boundaries between theatre and sport, this performance turns Jelinek's linguistic gymnastics into an Olympian feat for the actors and audiences alike.

“Bristling with ideas and fierce feeling” The Guardian

“A marathon effort lifted by humour” The Times

" ...the production has managed to pull off that mainland European, postdramatic, post-Brechtian aesthetic so well, despite many of the actors being British... a success in British theatrical terms....This is an acutely intelligent rendering of an important bit of literature."
Andrew Haydon, Postcard from the Gods 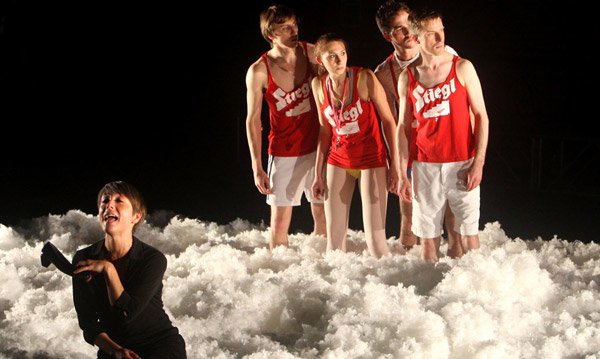