The Power of Love

The Power of Love

A modern play for a modern audience.

The Power of Love is what brought Isabel and Matt together, now could it be what tears them apart? A compelling love story that questions whether love is ever real and where nothing is as seems.

Engrossing, savage and darkly humorous, The Power of Love explores the themes of relationships, secrets and sexual identity in this absorbing new dramedy by New Zealand’s most outstanding up and coming writer, Tony J. Williams. As the story reaches its shocking climax, the audience discovers that no one is what they seem to be.

Starring Anna Winslet as Isabel (appeared in Titanic with her sister, Kate Winslet. Other Film credits include Red Rose, Somnolence. She toured nationally with West Side Story and Mikron) and Christoph Dostal as Matt (Film and Theatre credits include Oscar entry for ‘Best Foreign Film, For God and Country, Steven Spielberg´s Award winning TV series Band of Brothers and world tour with his Wolf Haas one man show The Boneman).

This new poignant and inspiring play is directed by the talented Hollywood Director, Ilmar Taska. His prodigious credits include producing and directing segments for The Oscars, c0 – writing and producing Back in The USSR starring Roman Polanski, and he has, most recently produced and directed the film Thy Kingdom Come which will be out on general release soon.

Famous Austrian designer Maria Oberfrank is attached to design the costumes. Since studying with Vivienne Westwood and Helmut Lang, Maria created her own brand, PITOUR, as well as founding the VIENNA FASHION WEEK in 2009. 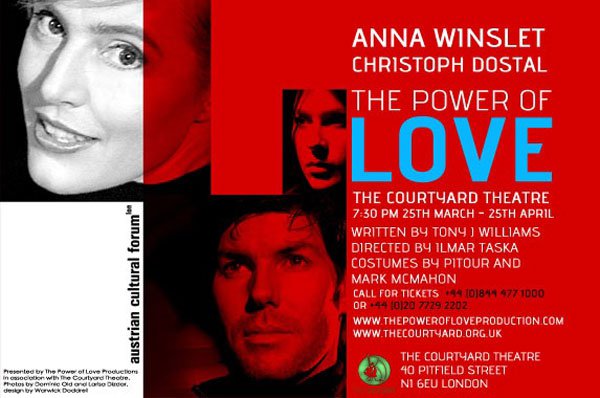