Kiki Kogelnik: Fly Me to the Moon

Kiki Kogelnik: Fly Me to the Moon

Working in New York in the 1960s, Kogelnik was a well-known artist and contemporary of figures such as Roy Lichtenstein and Andy Warhol. Despite her early popularity, Kogelnik’s work was often overlooked by institutions and slowly written out of the history of post-war Western art.

Fly Me To The Moon surveys the diverse practice of this remarkable artist, focusing in particular on the works produced by Kogelnik during her time in New York in the 1960s and 1970s.

The exhibition includes a number of paintings, sculptures and drawings which reflect the tumult of the Cold War era, when the Space Race was at its height and fears of nuclear annihilation were growing.

Throughout her career, Kogelnik employed an exuberant palette, which belied its often apocalyptic subjects; from macabre skulls and severed limbs to disembowelled figures. These deathly bodies, rendered disposable in an increasingly mechanised world, sound a note of caution in an era continually transformed by new technologies.

With thanks to the Kiki Kogelnik Foundation and Mono Schwarz-Kogelnik. 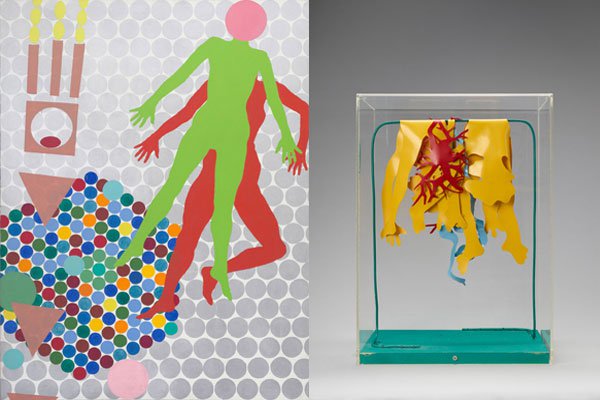