The ACF London is pleased to host a special tribute concert, marking the first anniversary of the death of composer and conductor Joseph Horovitz, celebrating the broad range of his many achievements.

The programme will include two key items from the Horovitz catalogue: His Clarinet Sonatina (a modern ‘standard’ for the instrument) and his 5th String Quartet (written for the Amadeus Quartet in 1969 and the piece that the composer thought his best).

When the 11-year-old Joseph Horovitz fled Nazi-occupied Vienna with his family in 1938, he ended up in Britain. He was sent to a school specifically created to turn Austro-German exiles into model Englishmen. He played cricket, sang folksongs and went to Oxford. But thereafter, he would spend the rest of his long life as a composer of distinction, straddling the divide between two homelands and two cultures. His music crossed a comparable division between ‘serious’ and ‘popular’. There were operas, ballets and chamber scores - but there was also film and TV music, like his famous theme-tune for the Rumpole of the Bailey series and the jazzy Captain Noah and his Floating Zoo. 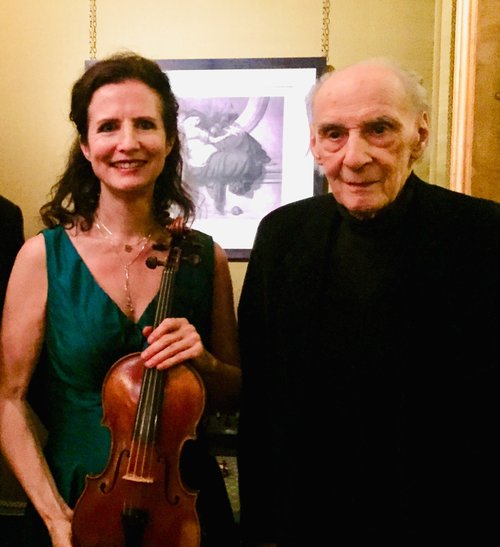 The London Chamber Ensemble was founded by violinist Madeleine Mitchell in 1992 to perform Messiaen Quatuor pour la fin du temps, going on to perform at the BBC Proms. Their recording of the Messiaen, along with Krauze Quatuor pour la Naissance, was the widely recommended version of the work for many years. “An all star group which manages to outdo all its rivals” Gramophone.

Madeleine was asked by the Alwyn Trust to put together an album for Naxos of William Alwyn Chamber Music and Song, all first recordings. This was followed by the London Chamber Ensemble album for Naxos/BMS of chamber music by Grace Williams (2019), all world premiere recordings, Guardian CD of the Week and no.2 in the Classical Charts: “Passionate and persuasive advocacy, gripping interpretations..more please” Gramophone

The LCE were invited to appear in the Southbank Centre’s International Chamber Music Season 2020/21 in Mitchell's programme 'A Century of Music by UK Women' 1921-2021. This was live streamed from St John's Smith Square on International Women's Day, supported by the RVW and Ambache Trusts, featured on BBC Radio 4, Radio 3, Classic FM, Scala Radio, The Guardian, The Independent, BBC Music Magazine, The Strad Premiere of the Month and Musical Opinion: “very fine performances of a broad range of fresh and rewarding repertoire…the players brought energy, precision and interpretative imagination

Madeleine Mitchell won a Royal Philharmonic Society Enterprise Award in 2022 for her creative project linking art and music in film, including her Anglo-Russian LCE String Quartet introduced concert programme with the V&A exhibition Fabergé: Romance to Revolution. The quartet has given several concerts recently, including the Schubert Society of GB and the Highgate Festival, and recorded a work by Effy Efthimiou. With James Gilbert and Julian Chan they opened Kensington & Chelsea Music Society 2022/23 season in the newly refurbished Leighton House, in tribute to Joseph Horovitz and with Brahms Clarinet Quintet: “superb, high quality chamber music-making of which Horovitz would certainly have approved. “ Malcolm Miller British Music Society Journal/Musical Opinion