For the second exhibition in a series of solo presentations that explore the contemporary relationship between sculpture and digitisation – the dissemination of images and their materiality – the Austrian Cultural Forum is proud to present STICKY, a solo exhibition by artist Emma Hart.

For Hart, sculpture, and more recently ceramics, provides material to physically corrupt and 'dirty' digital images. In the exhibition artworks such as Mate (2014) make it unclear where digitisation ends and where sculpture, or the physicality of ‘being a person’, begins. Embracing this difficulty, we search for a break in the smooth surfaces of our mediated world. The limitations of the image and screen are exposed through human emotion and voice. Confronting the virtualization of our feelings and the monitoring of both objects and ourselves, the exhibition presents a body of work that highlights Hart’s intermingling of materials and daily experience. Pushing sculpture into the world of images and arousing more life and embarrassment out of them, the exhibition attempts to disrupt the digital flattening of our reality.

Initially commissioned by, and presented at the Folkestone Triennial in 2014 the artworks were first shown in a decrepit abandoned domestic house in Folkestone. Here at the Austrian Cultural Forum the setting is at the other end of the social scale - grand salons and butler’s staircases set Hart’s work into action. But the nerves Hart’s work draw on are still jangling.  Overstretched arms hurry down the staircase, in a pink of shame hue, trying very hard to offer you a drink, ‘The Pits’ (2014). The over the top floral photographs on the trays demand you notice them. In opposition, the images concealed on the superficially superior clipboards are only partly given. Flashes of their secret images are reflected in their eyes. A full picture is never revealed. If this unsettles your sense of self, a ‘rehearsal station’, or a supportive ‘Mate’ (a females legs constructed from handrails) has been provided. Practice who you are, practice your presentation, practice being someone. Utilising the two upper floors of the Austrian Cultural Forum, the exhibition is spread throughout the building, with no central focus. Instead the works maneuver throughout the space offering their own passage.

Emma Hart lives and works in London; her work has featured in exhibitions and performances both in the UK and internationally. These include the solo exhibitions ‘Spread’, Art Exchange (2015); ‘Giving It All That’, Folkestone Triennial (2014); ‘Dirty Looks’, Camden Arts Centre (2013); ‘M20 Death Drives’, Whitstable Biennale (2012) and ‘TO DO’, Matt’s Gallery, London. Recent group exhibitions include ‘Only the Lonely’, La Galerie CAC, France; ‘Hey I’m Mr.Poetic’, Wysing Arts Centre (2014); ‘Bloody English’, OHWOW Gallery, Los Angeles (2013) and ‘The World Turned Upside Down’, Mead Gallery, Coventry (2013). Hart was awarded a Random Acts commission for The Jarman Award 2013. In 2012 she was shortlisted for the Jerwood /Film and Video Umbrella Awards for ‘Tomorrow Never Knows’, with an exhibition at Jerwood Space, London.

Note: the exhibition ‘Oliver Laric: Giving Away the Moulds Will Cause No Damage to His Majesty's Casts’ will still be on display in the lower gallery of the ACF until Friday 3 July 2015. 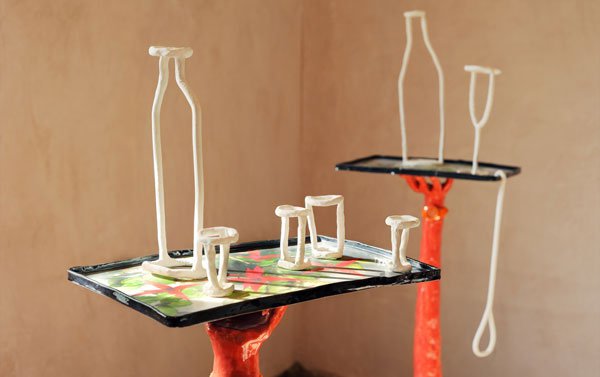